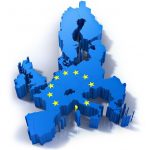 From March 29 the UK will no longer be an EU member state. EEA nationals (EU plus EEA countries: Iceland, Lichtenstein and Norway) will have to use the EU Settlement Scheme if they want to stay in the UK after June 2021.

Whether there’s a deal or no-deal by 29 March 2019 will have an impact on the right to stay for around 3.6 million EEA citizens.

What happens if there’s a Brexit deal?

If there is a deal, EU nationals can enter, work and settle in the UK as they do now until 31 December 2020.  Anyone arriving before that date can apply to stay in the UK permanently. This also applies for British citizens in the other 27 EU nations.

After the 31 December 2020, EU citizens who want to live in the UK would need to get a work visa.

Those who haven’t lived in the UK for 5 years must apply for “pre-settled status”. They can then stay for 5 years and after that must apply again for the right to stay.

The scheme will launch on 30 March 2019 and applications to the scheme will close on 30 June 2021 with a six month “grace period” for those forgetting to apply or who are vulnerable.

If no deal has been agreed, the Home Office says it will run the settlement scheme above but with some changes:

Who will be exempt?

The following people will be exempt under published guidance:

EU citizens who only have a permanent residence document will need to apply for settled status as will non-EU nationals in the UK who are married to an EU citizen, civil partner or unmarried partner.

Applications can be made online or via the app but not using an iPhone.

Can we apply now?

You can apply now although the scheme is currently officially in ‘test phase’, and there are restrictions.

How much will it cost?

Initially, EU citizens were going to be charged £65 but the government changed its mind in January of this year. Applications will now be free of charge from 30 March 2019 or you can apply now and get a refund.

Applicants will have to provide biographical information and a photo and state whether they have any criminal convictions.

For British citizens living in the other 27 EU countries they’ll have the same rights to stay there as EU citizens have to stay in the UK.

Right to appeal if application rejected

If an application is rejected, the applicant has 28 days from the date of their decision to appeal the decision, subject to eligibility.

If you’re not a UK citizen but are living in the UK and would like to discuss the tax implications of these developments, call us on 01761 241 861 or email us today. We will be pleased to advise you or to invite you into our offices in Paulton, near Bristol and Bath, for a consultation.

Please note if you have immigration or visa questions you would need to consult a suitably qualified lawyer.